Do It Now! Developing an Achiever’s Character 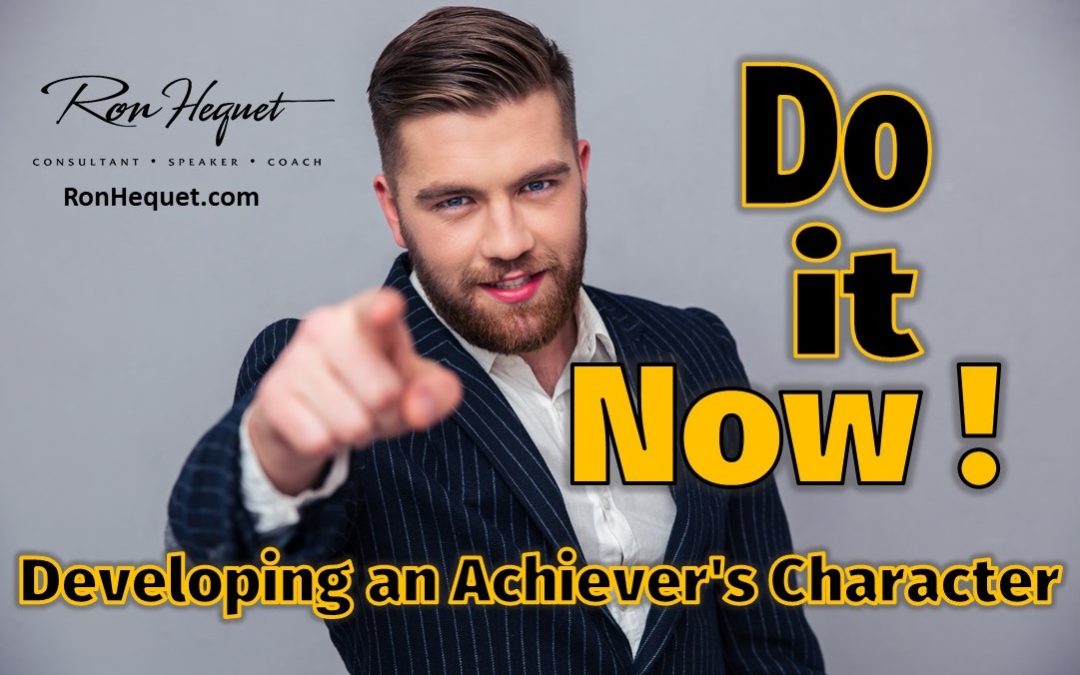 When you make a purposeful decision to control your mind and actions, you develop the character to achieve the positive.

Do it Now! No, it’s not a version of the Nike tag.  Businessman, W. Clement Stone first said it.  He and Napoleon Hill discovered one of the most fundamental secrets of achievers. They learned that procrastination and delayed decision-making were not a part of an achiever’s character.

I’m not suggesting that their decisions were not proceeded by due diligence. I’m sure they were. Instead, they didn’t get bogged down in the “paralysis of analysis” or the negative reactions from naysayers.

The statement, “Do it Now” is an affirming, self-actuating declaration that puts you into action.  Today, begin to develop this habit by applying it to small things.  Imagine you have a phone call to make and you’ve delayed making it, because that’s just your way. When “Do it Now” comes from your subconscious, it compels you to act, to make the call, to do it now!

William James, the well-known psychologist said, “Sow an action and reap a habit; sow a habit and reap a character; sow a character and reap a destiny.”  Each of these points is a choice. Likewise, the approach of “Do it Now” is a choice.  Not doing it now is also a choice.  Therefore, you are required to choose something, whether you realize it or not.

I don’t know many who could be classified as early risers.  However, think of what you could accomplish by getting out of bed just 15 minutes before your normal time. You would have extra time to reflect and meditate, or more time with your spouse or kids. You would have more time to pray, read, or listen to motivational material.  Going to bed earlier makes this easier.

An Army General I once knew, already an early riser, wanted to get up yet an hour earlier.  To accomplish this, he set his alarm one minute earlier every day for 60 days.  This allowed his body and mind to gradually adjust to the earlier wake-up time. Keep in mind that if you set the alarm earlier, then reach over and turn it off, you’re defeating the purpose. That’s not the right mind set for “Do it Now!”

People who never achieve a “Do it Now” character arrive late for work, buy birthday or anniversary gifts at the last minute, and function from the never-ending to-do list, scratching out one line and adding three more.  That’s “Do it tomorrow” thinking which ends up being “do it not.”

It’s Not Too Late

Many years ago, in one of my businesses, I implemented a “Do it Now” strategy with extraordinary results. The business had hit a rough period.  We kept a file on prospective customers, and we followed up with them until enough time had passed that we no longer considered them viable prospects.

I selected 20 prospects from the “dead” file and diligently prepared a special presentation, just for them.  Although the “Do it Now” concept was not part of my make-up at the time, I unknowingly applied its positive principles. Why, because it had to happen now.  My approach accomplished what I had hoped.  Within six weeks, I had closed 12 substantial sales.

“Do it Now” is an affirming, self-actuating statement that puts you into action. If you keep this statement top of mind and implement it often, you will find that every day, you’ll move closer and closer to where you’ve decided you really want to be.

To get more information and receive other no-cost special audio downloads, reports, articles, blog posts, and more, visit Ron Hequet where I cover valuable topics that every person wanting to grow their business or career needs to know.  And, if you’re ready to take your business to the next level, get a free assessment from me personally at Free Business Assessment or for those wanting to build your career go to Complimentary Coaching Assessment.